The coaches feature an aluminum body on a steel frame. They are 15 ft 11 in (4.85 m) high and 9 ft 10 in (3.00 m) wide, and weigh about 61,000 kg (134,000 lb).Depending on car design and seating configuration, seats are available for between 136 and 162 passengers, along with standing room. All newly built coaches now feature a washroom on the lower level; the original coaches for GO Transit have the washroom on the intermediate level in the same location where the cab is located in cab cars (see below). The coaches have two pairs of doors on each side which allow the entire coach to be emptied in 90 seconds. Some of the newer coaches have electrical outlets for laptop computers and other devices along with small tables.
One major variant is the cab car. The cab car is placed at the end of the train and features a full cab built into the end of the coach, from which the train's locomotive can be remotely controlled. This allows for push–pull operation with a faster turnaround time for trains, by avoiding having to physically turn around the train or locomotive. Unlike the similar Driving Van Trailer used by Britain's InterCity 225, the cab cars are otherwise identical to the regular coaches rather than imitating the design of the locomotive, leading to the appearance that the train is travelling 'backwards'. In 2014 Metrolinx (the provincial agency operating GO Transit) and Bombardier announced a new design for the cab car, which included a larger cab end and crash-energy management crumple zones.[2] Sounder Commuter Rail has also purchased this type of cab car. This new series of BiLevel Cabcar are currently and eventually planned to replace all the older generation BiLevel Cabcars on both commuter rail services, those of which will be converted to normal coaches.
Most operators of these coaches use a 480 volt head end power (HEP) system for heating, lighting, and air conditioning. The only exception to this is with GO Transit which uses a 575 volt system (575 volts is a standard industrial Canadian voltage, having been previously used by CN for their Tempo cars — also built by HS). Whenever GO has leased coaches to other agencies, a power unit has been supplied with the coaches, or when GO has leased coaches from other agencies, a locomotive with 480 volt HEP capabilities was also leased. Amtrak, Via Rail and Exo also use 480 volt HEP (480 volt is a standard industrial U.S. voltage). 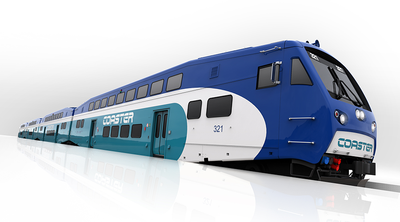 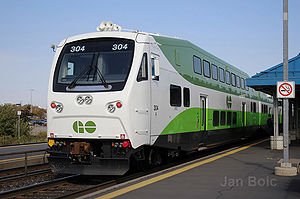 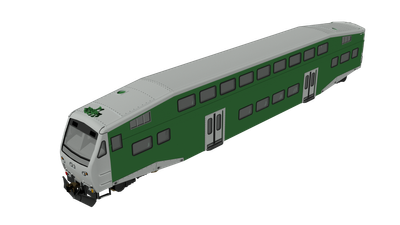